In October 2000, the first exhumation of a civil war mass grave was carried out in Priaranza del Bierzo using modern methods and scientific protocols…

The research team, directed by the CSIC, consists of forensic scientists, biologists, lawyers, anthropologists, sociologists, political scientists, and historians from different institutions, each with a specific function within the project.

“One part of the project consists of giving technical advice on the exhumations upon request from the associations involved. Forensic anthropologists, archaeologists, and biologists are in charge of locating the graves, exhuming the corpses, gathering documentation, preparing reports, and handing the remains over to the families. In addition, psychologists and anthropologists gather testimonies from family members and record the rituals and tributes carried out when the exhumations are finished and the remains returned to their descendants” ,

explains Francisco Ferrándiz, CSIC researcher and coordinator of the project. 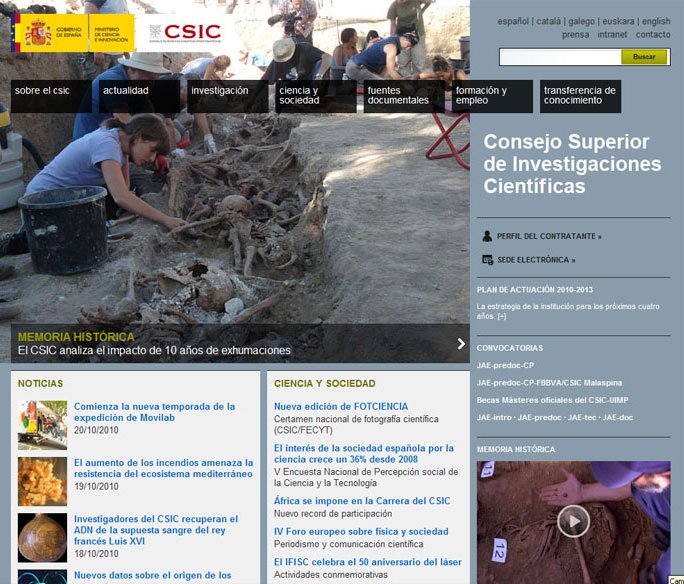 From this point on, the research phase itself begins: seeing how these phenomena are reflected in Spanish society, in its political discourse, its legislation, and in the cultural industries. In fact, the project has a specialist in literary criticism who studies the figure of the disappeared person in 20th century Spanish literature.

“In short, the issue is to study, in the context of the so-called transitional justice, the different mechanisms that a specific society puts into action to face a traumatic past,”

There are many kinds of mechanisms for this: laws, museums, monuments, tributes, exhumations, offices of remembrance, and, in some societies, truth committees. “These are very complex and controversial processess that polarize societies. We want to record what is happening and to try to understand why. Also, we attempt to do this from a comparative point of view, establishing differences and similarities with other countries that have undergone similar processes, such as Argentina, Chile, Iraq, and the former Yugoslavia,” he concludes. In fact, one of the members of the research group is Luis Fondebrider, president of the Argentinian Team of Forensic Anthropology.

“We realize that the subject is very complex and can be extremely sensitive. But precisely because of this, we think that we, as scientists, have the obligation to contribute to a calmer social debate, based on scientific reasoning”, concludes the CSIC researcher. . In order to inform society directly, the project has its own web page: www.politicasdelamemoria.org

“No one knows for sure the number of exhumations, because we do not have data from all of the autonomous communities and there is no central registry, but we calculate that more than 200 graves have been opened since the year 2000, almost all graves of the republican side, although there are exceptions, such as the grave in Camuñas, where we also participated in the excavation. Although the project officially began this year, some of us have been present at exhumations since the year 2000, so we have access to a lot of documentation,” explains Ferrándiz, researcher from the Center of Human and Social Sciences of the CSIC..

“But the exhumation phenomenon is not new. As soon as the civil war was over, in the 1940s, there were already exhumations of graves and some of them were even documented officially. The exhumations for moving the bodies to the Valle de los Caídos, the majority of which were also documented, began in the year 1958, adds the researcher.

With the arrival of democracy, in the 1970s, there was an important movement by the families of republicans who exhumed their dead: “they were home-made exhumations, with no resources, carried out by family members with little institutional support,” explains Ferrándiz. These exhumations are not officially documented, although there are numerous photographs and testimonies that are turning up now.

All this makes it even more difficult to calculate the number of deaths in the rear-guard, from both sides, that occurred during the civil war. “Historians estimate that, from the beginning of the conflict through the postwar, there were some 50,000 civilians killed by the republican rear-guard and some 150,000 by the national rear-guard,” explains Ferrándiz. Studying the graves also makes it possible to reach conclusions about the nature of this violence and its degree of organization.