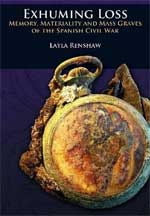 This book examines the contested representations of those murdered during the Spanish Civil War of the 1930s in two small rural communities as they undergo the experience of exhumation, identification, and reburial from nearby mass graves. Based on interviews with relatives of the dead, community members and forensic archaeologists, it pays close attention to the role of excavated objects and images in breaking the pact of silence that surrounded the memory of these painful events for decades afterward. It also assesses the significance of archaeological and forensic practices in changing relationships between the living and dead. The exposure of graves has opened up a discursive space in Spanish society for multiple representations to be made of the war dead and of Spain’s traumatic past.