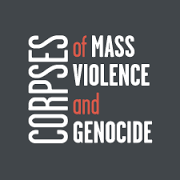 Corpses: Search and Identification in post-Genocide and Mass Violence Contexts 2nd Annual & International Conference of the Research Programme CORPSES OF MASS VIOLENCE AND GENOCIDE Conference to be held at the University of Manchester, UK on 9 – 11 September 2013

Following a first conference in Paris in September 2012 focusing on the treatment of corpses in the phase of destruction (see here), this second conference of the research programme “Corpses of mass violence and genocide” aims to explore another severe manipulation of bodies after the killings: addressing their search and identification.

The beginning of the 21st Century has already experienced many occurrences of this phenomenon, be it the opening of mass graves from the Spanish Civil War, the identification of corpses by the International Criminal Tribunal for the Former Yugoslavia, the return of human remains from the Gulag and even the localisation of sites of Jewish massacres from the Holocaust in Eastern Europe. Whether bodies have been destroyed through industrial processes, mutilated, buried individually or collectively or even reburied in secondary or tertiary sites, the search and identification of these victims’ remains are undertaken in various circumstances and raise a range of questions.

The organisers are therefore calling for papers dealing with the search and recovery of bodies in the context of mass crimes. The conference will focus in particular on the twentieth century. Studies may deal with any geographical area and should focus on the methods and processes for identification, as well as the motivations and interests behind these pursuits, taking an instrumental perspective which promises to open up new avenues of research.

A wide range of themes and approaches are expected to be dealt with, and the conference organisers would particularly welcome papers dealing with the following aspects:

1. On actors: who exhume and identify victims of genocide? How is their legitimacy built?

2. On techniques: how do exhumations occur? Exhumations can be complicated, time consuming and expensive. Technologies and research should therefore be considered as well as issues of innovation, knowledge transfer and standardisation

3. On motivations: what do those exhumations and displacement of human remains tell us about NGOs, international organisations and societies themselves that endeavor the return of corpses?

5. The symbolic and legal status of identified corpses: their value and implications, including gender issues

Proposals must be no longer than 6000 characters, accompanied by a detailed biography and should be sent either in French or in English by 15 March 2013 to the following email: l.radford@corpsesofmassviolence.eu.

Notification of the acceptance of proposals will be sent around 15 April 2013. Final papers should be sent no later than 1 September to be included in the publication resulting from the conference. Funds are available to cover some of the transport and accommodation costs for delegates delivering papers. The conference will be conducted in English, with translations available.