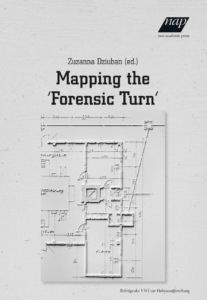 During recent decades, forensic investigation has become a standard response to the reality of mass graves resulting from genocides and various forms of political violence. From Argentina to Rwanda, from former Yugoslavia to Poland, the search for the sites of mass burial, the application of archaeological and forensic practices, and the use of advanced technologies to collect and analyse evidence have all played a major role in transforming former landscapes of violence into scenes of crime. Yet truth-finding is not the only driving force behind forensic investigations performed at the spaces marked by a difficult past: the issues of politics and justice are at stake, as are the dynamics of memory and mourning and of the future of post-conflict societies, framed through the prism of the relationships between the dead and the living. The diagnoses of the ‘forensic turn’ therefore open up a complex terrain shaped by the interplay of scientific protocols, political interest, ethical sensitivities, and materialities of mass death – bringing about a proliferation of practices and counter-practices, discourses and counterdiscourses, imageries and counter-imageries. Building upon this recognition, this book asks how the turn towards forensics both as a standardized practice in the search for and identification of bodies, as a paradigm shift in remembrance and as an emergent cultural sensitivity, extends beyond the sites where forensic science operates, and transforms the fields of social and human sciences, political activism, popular imagination, and art.
Born out of debates held during the international workshop Forensic Turn in Holocaust Studies at the Vienna Wiesenthal Institute in June 2015, this book gathers contributions investigating theoretical, methodological, political and practical implications of the ‘forensic turn’ within and well beyond the (inter)disciplinary realm of Holocaust studies.

Poetics of Resistance against oblivion and impunity. Stories of mothers whose...
Scroll to top