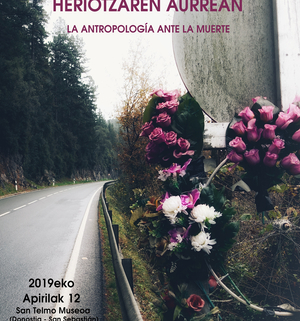 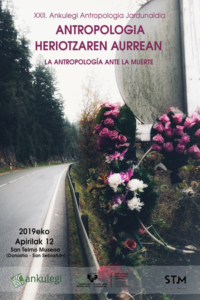 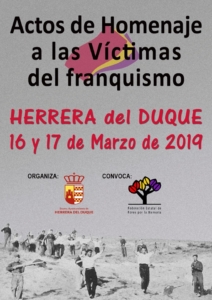 Tribute to the victims of Franco’s regime

Francisco Ferrándiz and Zoé de Kerangat will participate in the Second Tribute to the victims of Franco’s regime in Herrera del Duque (Badajoz).

Organized by the Center for Human and Social Sciences (CSIC), Memories in Network association, Cauri, Association of Friends of the NMA, the Complutense University of Madrid and the National Museum of Anthropology.

A course conducted by Germán Labrador

This course, with its design rooted in the exhibition The Poetics of Democracy. Images and Counter-Images from the Spanish Transition, explores the imaginary of 1970s Spain from a central hypothesis: the articulation, in the confrontation with Francoism and post-Francoism, of citizens’ breakaway resulting from an upsurge in certain aesthetic practices. Through these practices, new political subjects were shaped in opposition to the regime’s institutions and forms of discipline. This other society included women, young people, neighbourhood groups and “dangers to society”, the last of which refer to the Francoist Law that stigmatised those considered a menace to the regime, from beggars to homosexuals. In parallel, the emergence of this multifarious civil society and its struggles for emancipation questions the limits of the dictatorship and the transition to democracy, its practices producing and organising alternative forms of culture and social and urban models, in addition to ways of life referred to here inside this framework as ‘transitional’. The documents of such actions and proposals constitute a democratic archive, susceptible to questioning, in exhibition terms, and intervened in from the present. Thus, to think about the transitional legacy means to reflect upon the origins, devices and limits of democracy, and imagine its possible transformations. 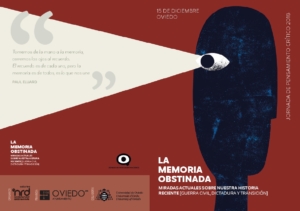 Link to the program

The Horizon 2020 project ‘Unsettling Remembering and Social Cohesion in Transnational Europe’ (UNREST) Final Conference was held at the British School at Rome on 6-8 February 2019.

This international conference invited some of the leading specialists in Memory Studies, History, Social Anthropology, Political Philosophy, Cultural Studies and Human-Computer Interaction, heritage professionals, cultural practitioners, and policymakers to discuss the work of the UNREST project over two days at the prestigious British School at Rome.

Francisco Ferrándiz and Marije Hristova participated in the journeys with the following conference: “Remembering at Sites of Mass Grave Exhumations”

4 Debates within the debate workshop “Exhumations and Memory in contemporary Bosnia, Poland and Spain”, part of the UNREST and BELOW GROUND project by Francisco Ferrándiz (ILLA, CCHS-CSIC).

Date of celebration: 23 March, 2018 at the Center for Human and Social Sciences of the CSIC (Madrid, Spain).

Workshop: Exhumations and Memory of the Spanish Civil War in the XXI C.January 30 and 31, 2017

6 debates within the debate workshop “Exhumations and Memory of the Spanish Civil War in the XXI C” that is part of the project UNREST and BELOW GROUND, by Francisco Ferrándiz (ILLA, CCHS-CSIC) and Francisco Colom (IFS, CCHS-CSIC) .

Date of celebration: January 30 and 31, 2017 at the Center for Human and Social Sciences of the CSIC (Madrid, Spain).

6 debates within the debate workshop “UNREST Stakeholder Workshop” which is part of the UNREST and SUBTIERRO project, by Francisco Ferrándiz (ILLA, CCHS-CSIC).

MOOC course: How We Remember War and Violence: Theory and Practice

Consider how we recall war and violence and discover a different way to remember. Our memories of conflict are often used against us. Nationalist movements manipulate the story – offering confrontational, harmful perspectives. But there’s a different way. This course takes a new approach to remembering, ‘agonistic memory’. You’ll explore how it improves upon the other two models of memory – ‘cosmopolitan memory’ and ‘antagonistic memory’, going on to see how agonistic memory can be used in your own work to relate more accurately to the past. By the end of this course, you’ll understand how the various models are used today – and will have a new way to look at history.

Where the Forest Thickens – English subtitles

Within the framework of the European Project UNREST, work has been done on the creation of a play on the exhumations carried out in Poland, Bosnia Herzegovina and Spain.

In the following link you can consult a pedagogical package of the play:
PEDAGOGICAL PACKAGE

War Exhibit at the Ruhr Museum in Essen

The exhibition presents controversial agonistic encounters on the level of form and content. It presents diametrically opposed opinions about the same events and exposes history to a provocative media ‘cross-fire’ for instance by featuring in close proximity authentic battle gear, explicit casualties photos, and cutting-edge video game entertainment. Rather than arranging objects and interpretations of warfare from one consistent narrative vantage point, for instance the perspective of pacifism, it presents visitors a constellation of dialogical clusters without a priori privileging one perspective/interpretation over another. Moreover, rather than focusing on one conflict it covers different wars of the 20th Century. All the while, it maintains a clear focus on Ruhr Valley history to enhance the visitors’ affective ties to the material at hand.

The UNREST policy synthesis presents the findings of the project, reporting on the research parameters and providing evidence and analysis from the theoretical work testing agonistic memory as well as the empirical work on exhumation of mass graves and war museums. It also discusses the online course and cultural products that have been created during the project and make a number of policy recommendations on how to deal with difficult history. This policy synthesis is available in English, French, German and Spanish.

Press releases on the project 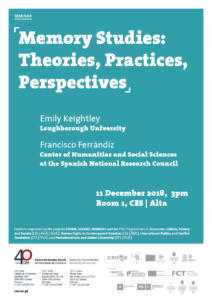 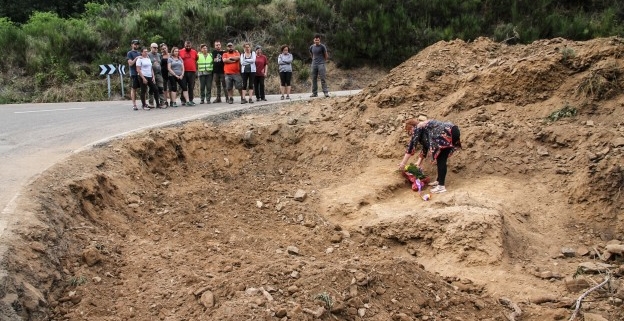 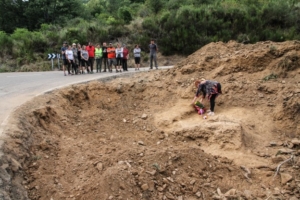 From the Transición to 15M

Our companions, Francisco Ferrándiz, Zoé de Kerangat, María Laura Martín-Chiappe, Francisco Etxeberría, and Lee Douglas, from the Politics of Memory, will participate in the conference. 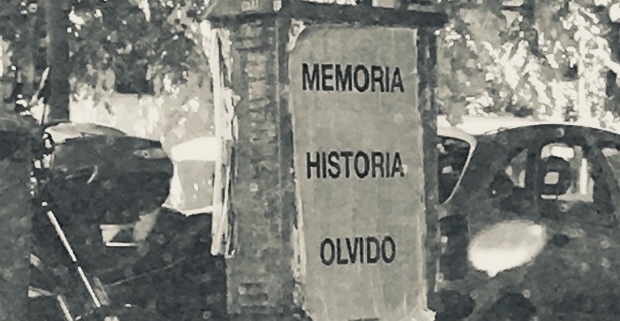 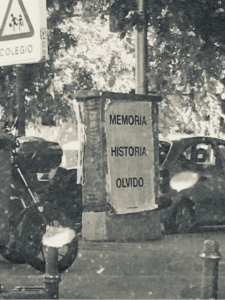 RETHINKING THE PAST: THE EUROPEAN (TRANS)CULTURAL MEMORY 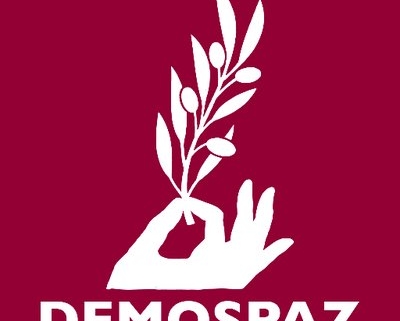 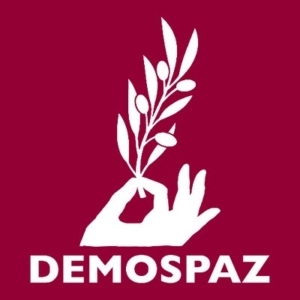 Research Seminar of the DEMOSPAZ-UAM Institute

“Enforced disappearances in the contemporary world: Referents of the global fight against impunity”