Exhibition “Fake Games. The Collectivized Monument” at the IVAM

The director of the Institut Valencià d’Art Modern (IVAM), José Miguel G. Cortés, the curator Miguel Caballero, and the artist, Fernando Sánchez Castillo, will present the exhibition Fake Games to the media. The collectivized monument.

The artist proposes the creation of a collective memorial in gallery 6 of the museum from one of the most iconic photographs of the Spanish Civil War: Death of a militiaman attributed to Robert Capa and Gerda Taro.

The main installation of the sample is a memorial based on the exchange of a small figure of a little plastic soldier, inspired by the famous militiaman photographed by Capa / Taro. Visitors over the age of fifteen – the minimum age for enlisting in the militias – can take a little soldier home in exchange for a reflection on this conflict and its aftermath that will be written on the walls of the gallery. 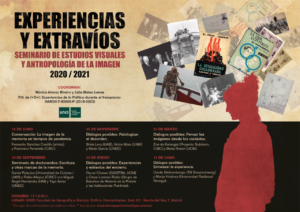 Seminar on Visual Studies and Anthropology of the Image

Next week begins “Experiences and deviations. Seminar on Visual Studies and Anthropology of the Image”, coordinated by Mónica Alonso Riveiro and Lidia Mateo Leivas.

It will take place at the UNED Faculty of Geography and History. Humanities Building, room 331, Senda del Rey 7, Madrid. 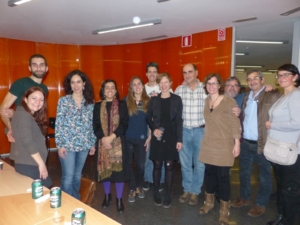 The presentation took place in the Department of Contemporary History of the Autonomous University of Madrid.

The thesis was directed by Francisco Ferrándiz (CSIC) and Jesús Izquierdo (UAM). She completed the thesis with an FPI grant (funded by the Ministry of Economy, Industry and Competitiveness) in the I + D + i project CSO2012-32709 “The Underground Past: Exhumations and Memory Politics in Contemporary Spain in Transnational and Comparative Perspective”.

Spain at war. Violence in the rear

Our partner Miriam Saqqa Carazo will participate in the conference. 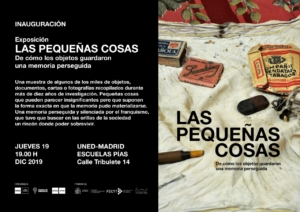 The little things. How objects kept a persecuted memory.

A sample of some of the thousands of objects, documents, letters or photographs collected during more than ten years of research. Small things that may seem insignificant but that assume the exact way in which memory could materialize. A memory persecuted and silenced by Francoism, who had to look on the banks of society for a place to survive. 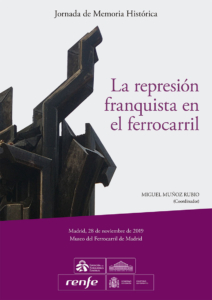 Franco’s repression on the railway

This Railway Historical Memory Day has the purpose of deepening the historical knowledge of what Franco’s repression on the railway meant.

That is why it has brought together a group of accredited researchers with a double purpose. On the one hand, acrisolar the understanding of all repressive chapters. And, on the other, to speak about the analytical meaning and the social repercussion that the memoralist movement has generated during these last years. The only way to achieve these purposes is to organize a day that brings together different knowledge disciplines and different approaches. It is intended both to confirm paradigms and to open new lines of interpretation.

Miriam Saqqa will give the lecture: Where? Rail mass grave and exile. 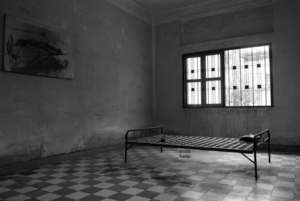 Crime Scenes and Sites of Memory

Mass crimes, acts of genocide and political violence have a “metaphysical” dimension against the human being, as highlighted by such diverse authors as Elie Wiesel and Vladimir Jankélévitch. However, whatever their conceptual scope, they are concrete acts that take place in precise places, take place in a unique time and their material actors are, at the end of the day, ordinary people. Reconstructing the scenes that result from these acts means returning to the actions the immediacy and even the banality that they had at the time of their exercise. Now, once the facts have been reconstructed, these same scenarios acquire a new symbolic and cultural condition, they are resemantized in different social spheres: in the criminal processes that reconstruct them, in the memory of victims, executioners and witnesses, in the visual and written archives that describe them and, last but not least, in artistic, literary and cinematographic recreation.

Francisco Ferrándiz will give the conference: Scenarios of crime against humanity: Mass Graves, Forensic Rescue and Phantom Militarism in Spain 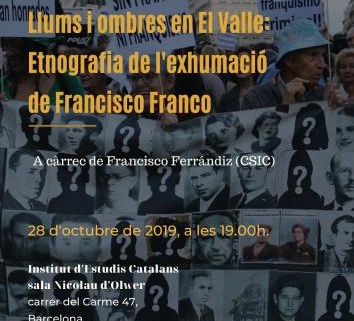 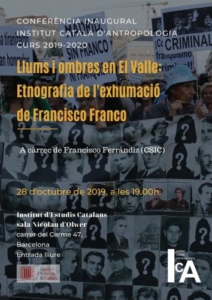 Lights and shadows in El Valle: Ethnography of the exhumation of Francisco Franco

Inaugural conference of the Catalan Institute of Anthropology. Course 2019-2020. 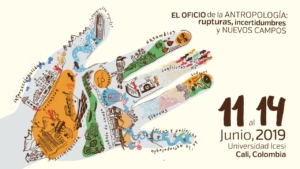 XVII Congress of Anthropology in Colombia

The trade of anthropology: ruptures, uncertainties and new fields

Our colleague Laura Langa will participate in the Congress in the multi-format panel: How and why narrate violence? Creative and artistic proposals from the territories. A dialogue of languages. 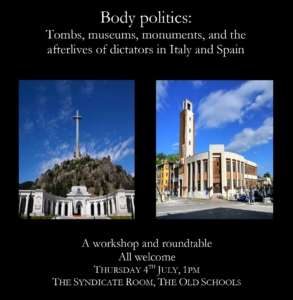 Body politics: tombs, museums, monuments, and the afterlives of dictators in Italy and Spain

The Syndicate Room, The Old Schools, University of Cambridge

Francisco Ferrándiz will participate in the workshop: Body politics: tombs, museums, monuments, and the afterlives of dictators in Italy and Spain, which will take place on July 4, 2019 at The Syndicate Room, The Old Schools (University of Cambridge).